In the United Kingdom on 8 May 1945, more than one million people celebrated in the streets to mark the end of the European part of World War 11. In London, crowds massed in Trafalgar Square and up the Mall to Buckingham Palace, where King George VI and Queen Elizabeth, accompanied by Prime Minister Winston Churchill, appeared on the balcony of the palace before the cheering crowds 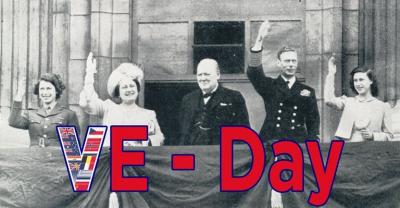 VE Day is celebrated and remembered by people around Britain each year. The 70th anniversary of VE Day in 2015 was marked with a series of events across the UK. There were three days of commemorations including parades, street parties, a service of thanksgiving and a concert in central London.

8th May 2020 will mark the 75th anniversary of VE Day, which will be another occasion of celebrations. The May Bank Holiday (usually the first Monday in May) has been moved to Friday 8th May in 2020 and this day will see the start of another three days of celebrations.

If you would like to be part of a small team to organise a special event for Hollesley please respond to this mail or call the Parish Council Clerk, Judi Hallett, on 01394 411405.