On 15th March 2020 the New Hollesley Village Sign was unveiled. Local Blacksmith, Andy Stebbens, tells the story behind it... 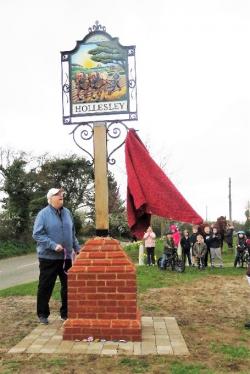 I’ve been a Blacksmith since leaving school and after my apprenticeship had a forge at Rushmere St Andrew for a time, before moving to Hollesley in 1989 and starting a small workshop in Boyton Road. After moving to Run Cottage and expanding the business, some 20 years ago I approached the Parish Council Chairman (Dennis Driver) about making a sign for the village. Most village Blacksmiths always seem to make the church gates and the village sign but with one thing and another it never got done!

Ironically the company I did my apprenticeship with made the Hollesley Church gates just after the war and then a few years ago, when we had a huge deer problem, I was asked to make the gates for the new cemetery.

In 2016 it was suggested we needed a new village sign and despite being retired from my blacksmith business and now just running the caravan site, I was more than happy to help; so you could say it’s taken over 20yrs, but we got there in the end!

But how did it all start? After initial talks, the Parish Council asked residents for ideas of subjects that could be included. Many ideas came forward, including a design from Mrs Barbara Stammers that included the two Suffolk Punch horses. Soon other items became very important: the rising sun, that so many of us are lucky to see daily, the water and ship (based on the Hollesley Primary School logo), the 8 special bells housed in Hollesley Church and a nod to modern agriculture with the tractor. We wanted to ensure all the special things about Hollesley were on the sign but that it wasn’t too crowded. All the ideas were passed to a company in Thetford, ‘The Village Sign People’ who put them together to come up with a final design.

With the design in place the fundraising started and very soon surpassed the target. Amazingly over £1,200 was donated by local residents and farms, over £800 was donated from special fundraising events, including a concert and the Community Café and the remaining funds were allocated by the Parish Council over a 3 year period. 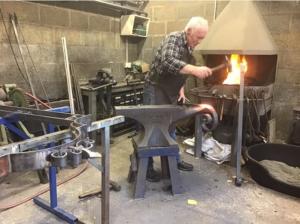 The physical making of the sign was delayed as the company were so busy, but finally in July 2018 we picked it up and once it was home, I could start work on the metal surround. It had to be something to complement the design of the central panel, not too busy and being up high the light would shine through it. It had to be quite organic as we live in a rural area. So after a few rough sketches on paper, the whole design was first drawn out full size on a sheet of ply board and then material cut and measured to fit. All scroll work had to be hand forged before finally being assembled and fitted to the oak post.

We were almost there…when the Planning Permission was in place (thank you East Suffolk Council!) the foundations and brick plinth could be built. I turned to local bricklayer, Roy Clarke. Roy donated all his time, expertise and enthusiasm to building the magnificent plinth and he has done a fabulous job.

The sign was finally unveiled on Sunday 15th March 2020 with over 100 residents watching. Rev’d Judith Andrews blessed the sign, children of Hollesley School sang a song to welcome it to the village and our dear friend Mr Dennis Driver pulled the cord to reveal the sign.

Now for all the other ‘Thank you’ messages. Firstly, to anyone who submitted an idea for the design, to anyone who contributed towards the cost, to the people who helped construct it: East Coast Property and RH &R Paul, to Mr Les Andrews for the magnificent celebration cake, to the Parish Council and the Council Clerk for managing the project and finally to the Suffolk Punch Trust for bringing the magnificent stallion to the ceremony.